A rich part of Sydney's history

Natural Features in the Area

The Woolwich peninsula consists of a succession of knolls leading down to the meeting point of the Parramatta and Lane Cove Rivers, ‘Moocooboola’.

The dock at Woolwich cuts into Hawkesbury sandstone that was laid down by an ancient inland river system. Weathering has resulted in a spur off the Hunter’s Hill/Woolwich ridgeline forming Clarkes Point.

Although there are no apparent creek lines, water seepage does occur through the layers of rock, particularly on southern facing slopes. Open forest and woodland originally covered much of the peninsula. Most of this has been cleared, although nearby Kellys Bush is a remnant of the vegetation.

With its 100 tonne marine travel lift and berthing capabilities, Woolwich Dock is the yard of choice for many of the super maxis and large power boats that visit Sydney’s waterways.

History of the Site

The Hunters Hill area was inhabited by the Wallumedegal clan and Aboriginal people would have used the Woolwich area for thousands of years prior to European settlement.

However, due to industrial use of the dock and parklands no evidence has been found of Aboriginal habitation although evidence exists at Kellys Bush that includes shell middens and a scouring groove used to make stone tools.

In 1835 a family of cabinet-makers, the Clarkes, were granted land on the eastern end of the peninsula (now Woolwich). They built several houses on the site including ‘Viewforth’. The western portion of the grant was subdivided in 1880, creating Alfred and Margaret Streets.

The 10 acre eastern portion remained in the family until 1883 when it was sold to Davy & Co., iron founder and then to Atlas Engineering Company. The site was favoured for its deep water frontage and proximity to shipbuilding works on Cockatoo Island.

One of the Clarke’s houses was used as an office and new workshops were erected. A floating dock was imported from England. Areas of foreshore land were reclaimed and slipways were created on the southern side (now Clarkes Point Reserve). They built new workshops, fitted them out with the latest equipment and linked them to wharves with tramways and cranes.

In 1895 subdivision of the rest of Clarke’s land resulted in 24 residential lots and the formation of Edgecliffe Road, Fernbank, Charlotte and William Avenues, the last three streets now lost within the Horse Paddock site. The 100 feet foreshore reservation was acquired for incorporation into the subdivision.

The Atlas Engineering Company went into liquidation in 1893 but work at the site continued until final closure in June 1898. 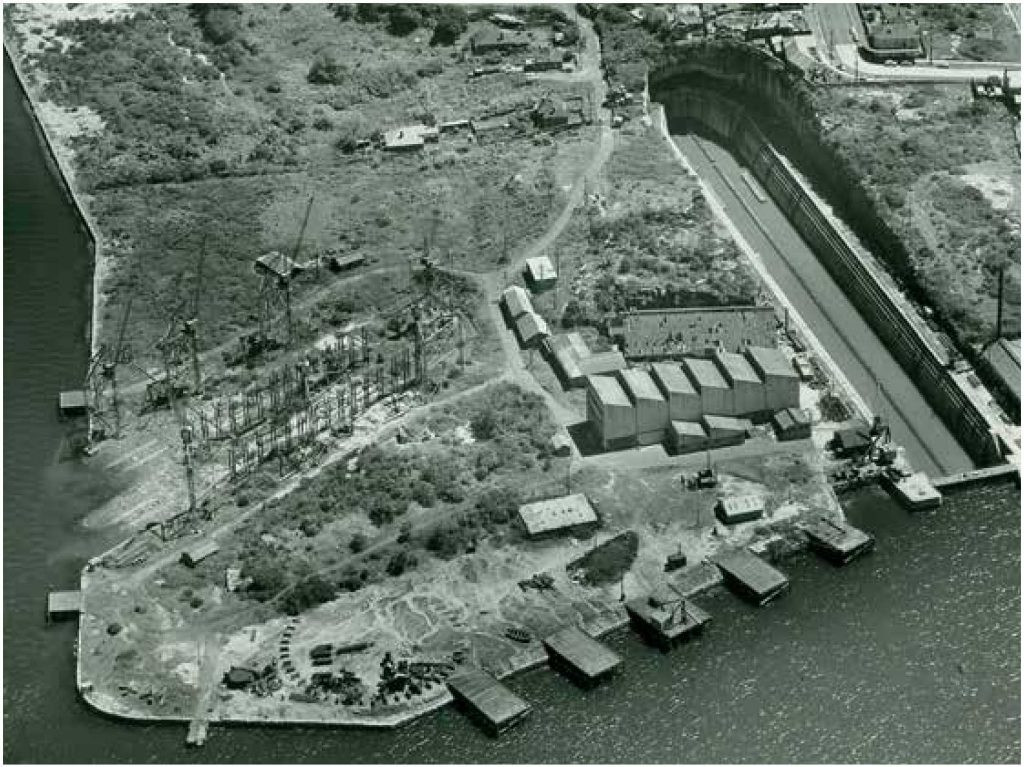 Morts Dock and Engineering Company, which operated a successful dock at Balmain, purchased the site in 1898.

A local company, W. Solomon & Sons excavated 85,000 cubic metres of sandstone to construct the new dry dock. On 4 December 1901 the dock was officially opened and used for the repair and fitting-out of large ships.

When it opened Woolwich Dock was the largest in Australia, 188 metres long and 27 metres wide. A pumphouse was brought out in parts from England to operate the dock.

Several extensions were carried out between 1902 and 1918 by W. Solomon & Sons, which had completed the dock after the termination of the original contractor, and the dock was lengthened to 260 metres. To achieve this William Street was acquired and a new road constructed – Franki Avenue, named after the general manager and later managing director of the company, James Peter Franki.

In 1917 the company employed 1,500 people. The scale of the industrial enterprise influenced the character of the surrounding development with the provision of the Woolwich Pier Hotel and workers’ housing.

In the 1940s the Atlas workshops were replaced by the sawtooth roofed building which still stands on the site and several brick buildings were added.

The busiest times for Woolwich Dock were during the two world wars when many passenger vessels were converted to armed troopships and repairs were carried out on damaged ships.

After the Second World War new work declined and the company closed down in 1958.

The site lay idle until the Army purchased it in 1963 for its water based transport operations.

During this period the three oldest buildings on the site were demolished: the relocated Atlas boiler shop, the pump house and an old galvanised iron shed.

The Army erected a number of metal prefabricated buildings, added timber fender piers and timber wharves to the dock itself and constructed a travelling boat crane beside the dock.

They made use of the dock for launching craft and the workshops for repairs and maintenance.

In 1997 the Army units based at Woolwich relocated to Townsville.

In the late 1990’s five Department of Defence sites around Sydney Harbour were vacated and it was proposed that the land be sold off to developers. Community Action Groups quickly formed to protest the sale of these sites. Foreshore 2000 Woolwich was one such group set up by residents of Hunters Hill and Woolwich and largely through the lobbying efforts of theses groups, the Federal Government agreed to the sites being returned to the people of Sydney. In 2001 the Sydney Harbour Federation Trust was formed to administer these sites and oversee their use opened up to public use. Woolwich Dock and the adjoining parklands (known as the Goat Paddock and the Horse Paddock respectively) were among the sites handed over to the management of the Harbour Trust.

Woolwich Dock and Parklands is a water gateway to Hunters Hill and exhibits the historical changes in the area since early colonial times.

A business consortium trading as Woolwich Dock Pty Ltd are in the midst of a 25-year lease on the site and have created a maritime village which includes boat maintenance facilities and a multi functional restaurant/cafe and function centre with panoramic views of the Bridge, harbour and city skyline. Visitors and restaurant patrons are able to enjoy water front fine dining while enjoying the ever-changing scenery on Sydney’s busiest waterway by day or the light show of the city by night.

Together with the adjacent parklands, this new chapter in the life of Woolwich Dock provides the community with an accessible, vibrant asset right on the harbour foreshores.